EPDM (Ethylene Propylene Diene Monomer) is an elastomer. It denotes a terpolymer based on three monomers namely ethylene, propylene and a non-conjugated diene. EPDM finds use as elastomer in several growth oriented application sectors such as automobile, building and construction, wires and cables, etc.

**Considering all the announced projects would be commissioned by 2016

(in million metric tonnes per annum)

The United States is the biggest EPDM producer.  Japan and Korea come next.

Globally, EPDM is likely to be in tight supply situation, in view of its steady growth in demand and new capacity creation not catching up with the growth in the demand. In Asia Pacific region, particularly in countries like India and China, the demand growth is likely to be high in the region of 8.5% per annum. Automotive industry drives the demand for EPDM, followed by wiring and cable insulation, moulded products and rubber hoses for industry. Such user industries have high level of relevance to the industrial and economic growth pattern in all regions.

Considering the likely growth in demand in diversified application sectors in all regions, there is strong case for capacity creation for EPDM.

EPDM price in different regions is given below: 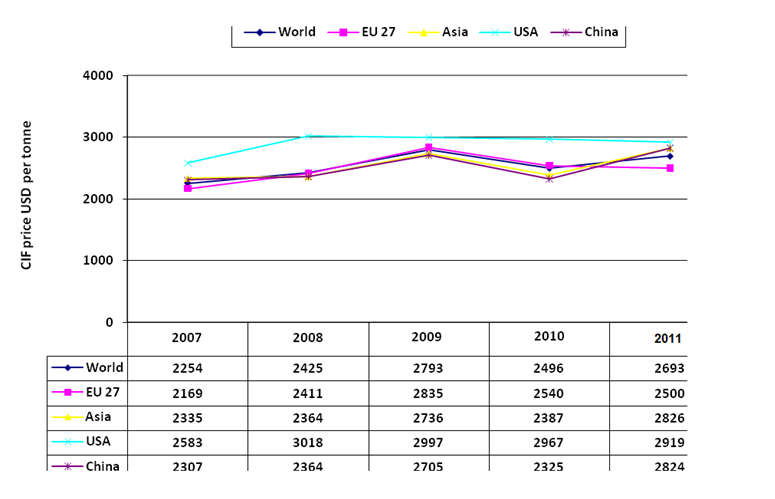 It is necessary to have firm tie up arrangement for the long term supply of feed stock, namely ethylene and propylene.

It is preferable to locate the project close to the ethylene cracker.

The global market can be targeted for the product outlet

Raw material availability has to be tied up with the supplier on long term contract.

To read the complete report, please purchase using the link below